I started out writing movies, after earning an MFA degree in screenwriting at the AFI Conservatory, where I met my wife, Ruth. Since then, we have collaborated on pretty much all our screenplays. (Teenage Caveman being an exception.)

As with any screenwriting career, there are some scripts you sell that end up on a shelf, never to be seen again, and others that you know will have a long road to the screen, if they ever get there. (Like our adaptation of the classic Arthur C. Clarke novel Rendezvous With Rama for Morgan Freeman’s Revelations Films.)

And if you’re lucky, some get made. Here are ours.

The Breed, starring Adrian Paul, Bokeem Woodbine and Bai Ling, is a supernatural buddy/cop movie about a human cop (Woodbine) teamed with a vampire officer (Paul) in a world where vampires aren’t supernatural creatures, but a genetic offshoot of humanity. It was a co-production of Sony/Screen Gems, originally airing on Starz.

Paradox, starring Kevin Sorbo and Steph Song, tells the story of a homicide detective on a parallel Earth that runs on magic, investigating a baffling series of crimes committed using the unknown techniques of science.

Teenage Caveman was directed by indie filmmaker Larry Clark (Kids, Bully) for HBO. Legendary special effects master Stan Winston produced and designed the creature. It was part of a series of Creature Features that saw independent film directors re-imagine 1950’s drive-in B-movies from American International Pictures. I got an Associate Producer credit on this one, and there was an action figure of the monster! 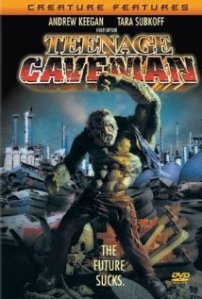